Founded in May 1864 for “the elucidation of history, particularly such portions as may refer to Delaware.”

Since its founding, the Delaware Historical Society (DHS) has acquired an extraordinary collection of more than 3 million objects, books, documents, photographs, and maps and nine historic buildings related to Delaware’s past and its importance to the nation. We are the only private nonprofit organization with the mission to serve as the statewide organization exploring, preserving, promoting, and sharing Delaware history, heritage, and culture to educate, inspire, and empower people and communities. This is our story. 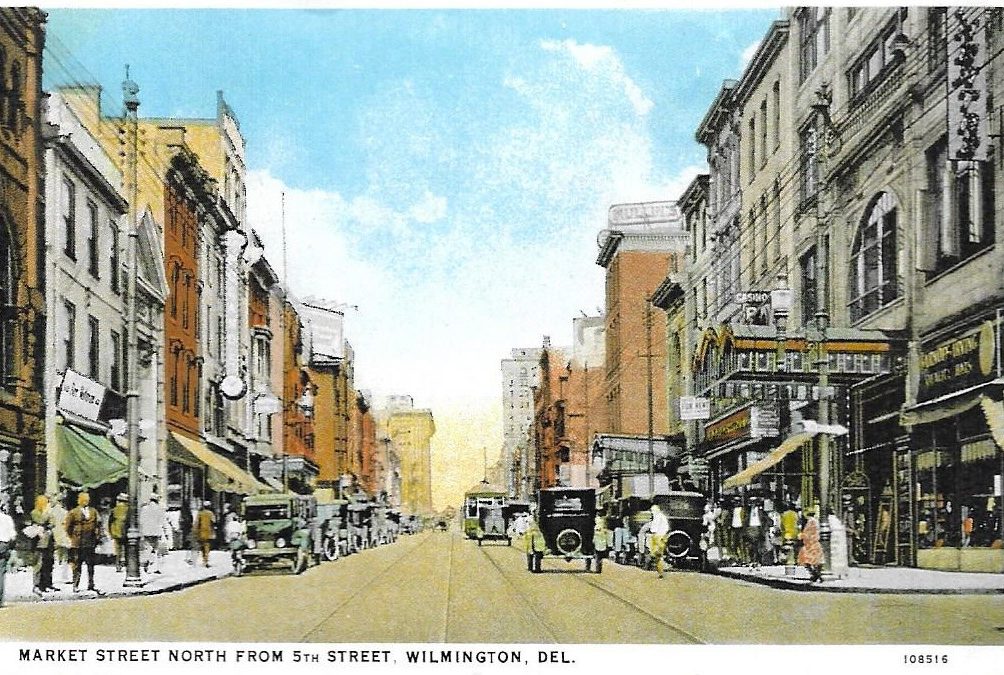 Based on North Market Street in Historic downtown Wilmington for over 100 years, we have grown from a single rented room in a library to occupy multiple historic properties: the Delaware History Museum and the Jane & Littleton Mitchell Center for African American Heritage in a former Woolworth’s; Old Town Hall; Willingtown Square; the Research Library, formerly Artisans’ Savings Bank; the Robert Porter House; and the Read House & Gardens, a National Historic Landmark located on The Strand in Old New Castle. 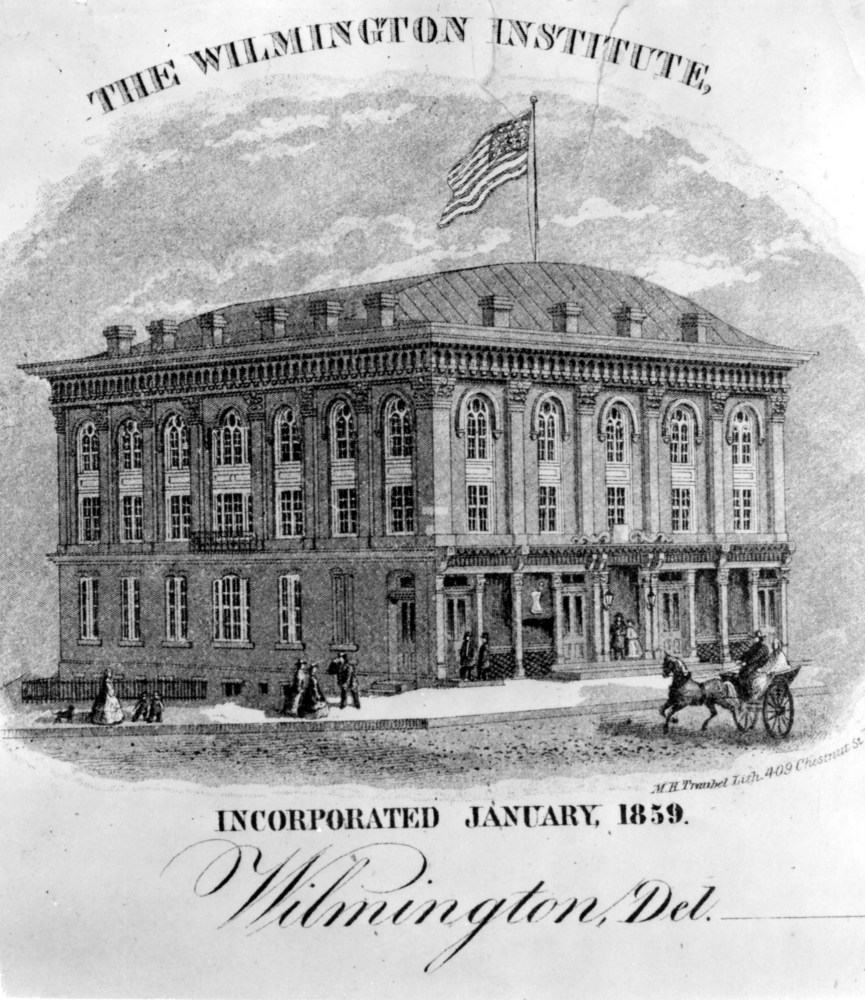 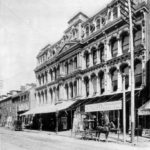 The lack of a state historical society, and possibly the events of the Civil War, impelled Delawareans to establish an organization to preserve state history. DHS was founded as the Historical Society of Delaware (HSD) in May 1864 for “the elucidation of history, particularly such portions as may refer to Delaware.” Attorney and politician Willard Hall (1780–1875) from Wilmington served as the first president until 1874. The first item accessioned into DHS collections was a small piece of wood said to be a relic from the boat that carried George Washington across the Delaware River on Christmas Day 1776. Early donations to the Historical Society included pre-Columbian artifacts, items related to New Sweden and Delaware’s colonial history, and contemporary materials concerning the war. 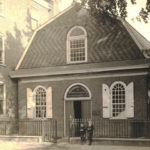 First Presbyterian Church in Wilmington, home of the Historical Society of Delaware from 1878 to 1916, c. 1898

In its beginning, HSD operated out of the Wilmington Institute on 8th and Market street, but space became limited. The Historical Society relocated in 1872, renting two rooms in the Grand Opera House at 818 Market Street, and again in 1878, to the First Presbyterian Church. HSD’s primary activity was to host monthly meetings where members and visiting historians presented papers on topics in Delaware history, many of which later were published. Membership was limited to men until 1895 when eleven women joined the Historical Society, but only as Associates. By the end of the nineteenth century, membership had increased to 485.

Old Town Hall with the Tatnall Bell in the tower, 1860

In the early part of the 1900s, meetings were well-attended. But membership started to decline by 1909. President Ignatius Grubb (1841–1927) single-handedly recruited 200 new members while inspiring current members to be more active, strengthening the organization. In 1915, the Historical Society granted full membership to women. 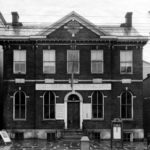 As membership became more inclusive during the 1910s, collections became more diverse. The Historical Society acquired the papers of the African American School Society and the Delaware Association for the Moral Improvement and Education of the Colored People, significant resources on African American education. HSD also began collecting more family history and genealogical materials. To accommodate this growth, Board members considered expansion. 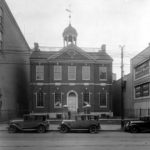 Old Town Hall shortly after it was restored, 1927

In 1916, HSD purchased Old Town Hall, which had been the center of civic life in Wilmington since 1798. The onset of World War I crippled fundraising efforts to pay HSD’s remaining debt on Old Town Hall, so it was rented to the American Red Cross from 1917 to 1919, before falling into disrepair in the early 1920s. In what was the Historical Society’s first fundraising campaign, several generous donors paid off the debt. Old Town Hall was restored and re-opened as the permanent home of DHS in 1927. With more room, the Historical Society collected more actively, and several major manuscript collections arrived over the next twenty years. 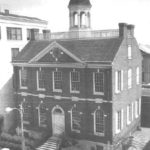 In 1946, HSD published the first issue of Delaware History. This is the only scholarly journal devoted to publishing articles on all aspects of Delaware history written by scholars, college and graduate students, and avocational historians. Today, Delaware History is published semiannually and continues to present fresh scholarship on the state’s history. 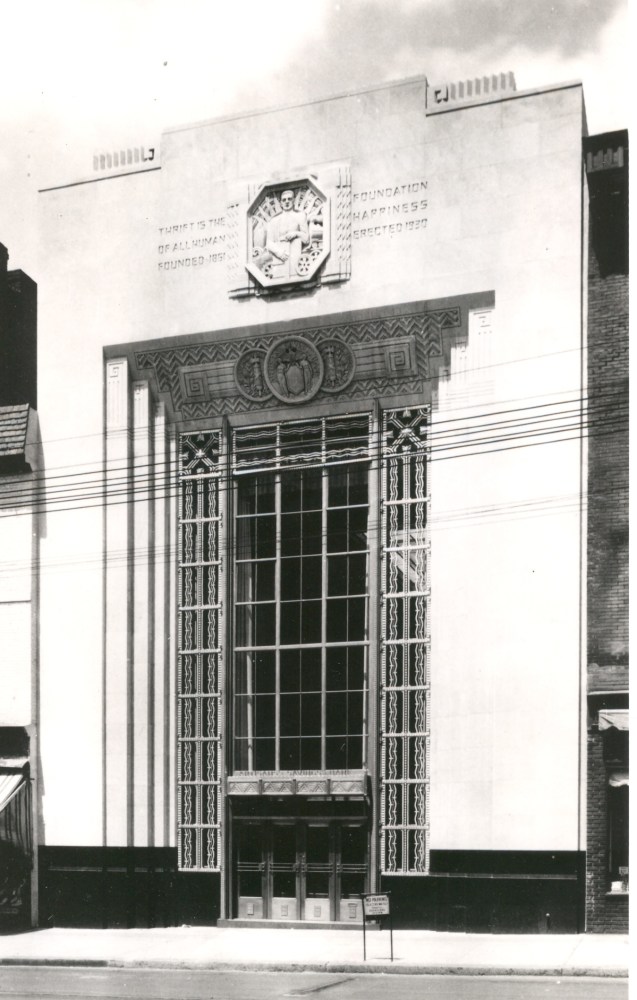 In the 1950s, HSD hired more staff to manage increasing responsibilities and projects. In 1962 the Society hired its first professional director. Six years after celebrating its centennial in 1971, HSD acquired the former Artisan’s Bank at 505 N Market Street to house the Society’s burgeoning library collections. Many of the original features of this 1930s Art Deco-style building remain intact, including the façade, doors, interior light fixtures, radiator covers, and the bank vault, which now safeguards historical documents. 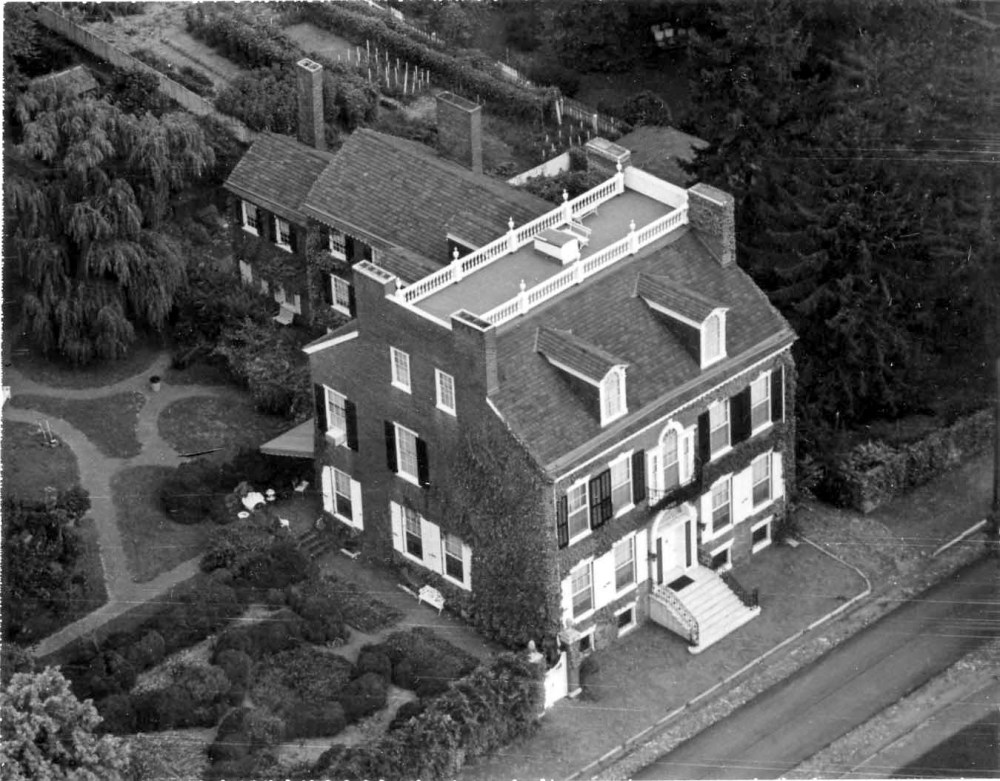 The Read House and Gardens became the HSD’s third historic property. Located on the Delaware River in Historic New Castle, the 14,000 square foot mansion was completed in 1804 for George Read II (1765–1836). The house is surrounded by 1.5 acres of formal gardens installed in 1848 by William Couper (1809-1874). Bequeathed to the historical society by Lydia Chichester Laird (1895-1975) in 1975, the site underwent a state-of-the-art restoration campaign in the 1980’s. In 2017 it was designated a National Historic Landmark for its outstanding Federal-style architecture. 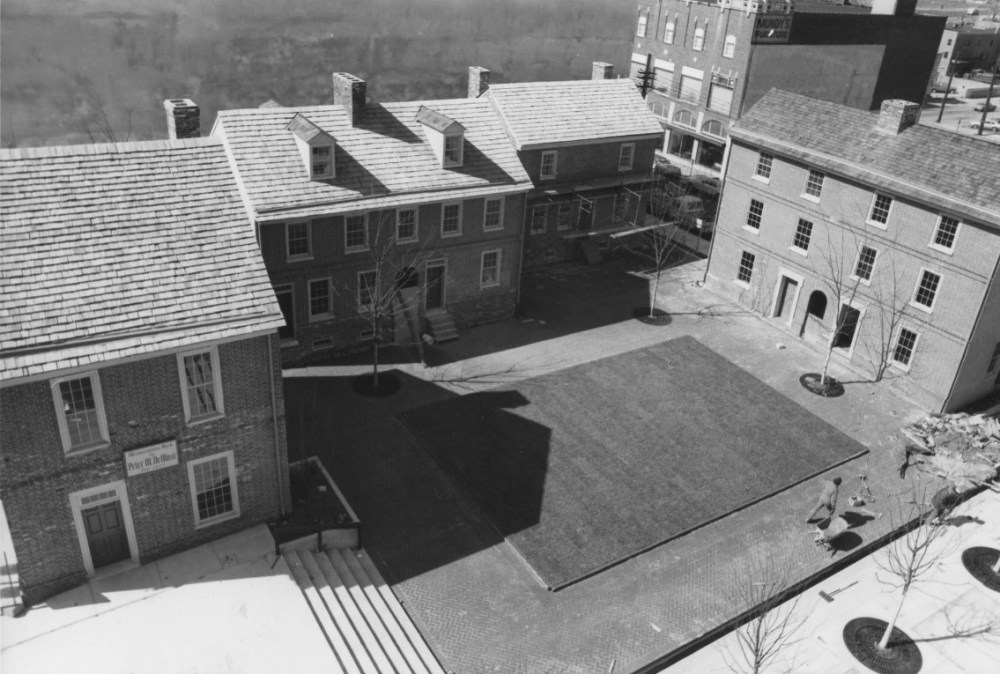 Willingtown Square was created as part of Wilmington’s national Bicentennial Celebration in 1976. The Old Town Square theater, which stood next to the Research Library, was demolished. In its place, four early-19th-century residential buildings were relocated from around Wilmington to create an urban courtyard. The square bears the name Willingtown after Thomas Willing, who laid out Wilmington’s streets in a grid pattern resembling Philadelphia’s and after whom the city of Wilmington originally was named. As the story goes, the King of England in 1739 changed the name of the city to honor a favored noble Spencer Compton, Earl of Wilmington. The buildings that constitute the square are the Cook-Simms House, Jacob and Obidiah Dingee Houses, Jacobs-Ferris House, and Coxe Houses. 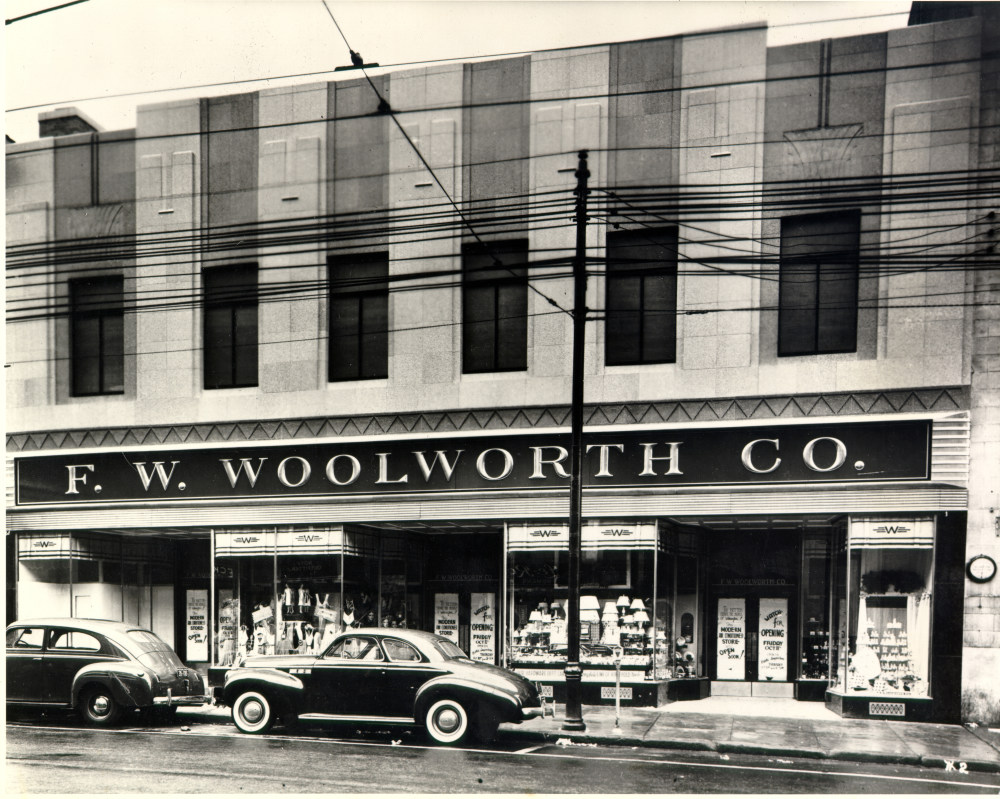 HSD’s historic properties and its leadership underwent significant changes during the 1980s and 90s, including major renovation projects on their new facilities—the Read House, infill additions in Willingtown Square, and the library’s basement. The board elected its first female president, Cynthia Hoagland, in 1982. The Read House & Gardens opened fully restored in 1985, followed by Willingtown Square in 1987. In 1989, HSD opened its first major exhibit devoted to African American history, Opening the Door to Freedom. In 1990, Barbara Benson (1990–2003) became the first female executive director. 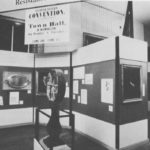 In the early 1990s, HSD added another building to its collection of properties, purchasing the Woolworth’s building at 504 North Market Street adjacent to Old Town Hall. In 1995, it was reopened as the Delaware History Museum. The new space allowed for permanent exhibition of objects from the collections, a temporary exhibition gallery, a museum store, a large lecture hall, several classrooms, and archival storage space. The building even included an immensely popular hands-on educational play area for children called Grandma’s Attic. The HSD changed its name to the Delaware Historical Society, celebrating its new identity in gold letters on an arch spanning Market Street.

In 2008, the society rebranded as the Delaware Historical Society. The Historical Society acquired several large collections of 20th century materials, including the papers of Senator William V. Roth, and in 2010, launched its online catalog. 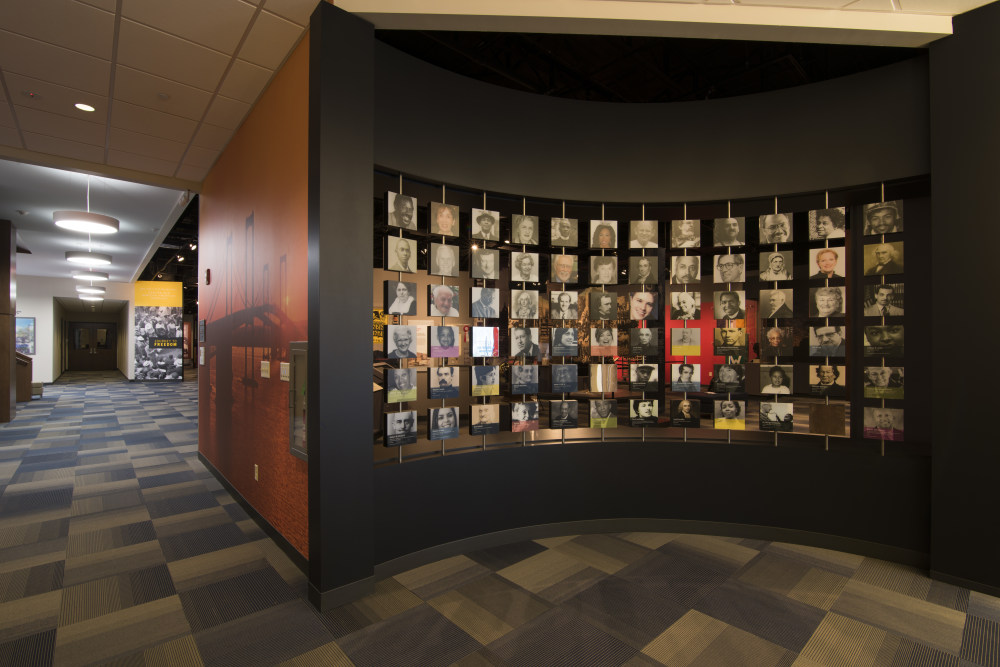 Wall of honored Delawareans at the entrance to the exhibits at the Delaware History Museum, 2016 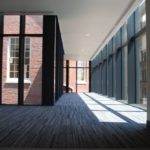 In 2012, DHS received a grant to build the Center for African American Heritage and in 2014, commemorated a milestone – 150 years of service to the people of Delaware. In addition to a full year of programs and exhibitions, DHS launched The Sesquicentennial Campaign, a $6.8 million fundraising initiative to add a center for African American Heritage, renovate the permanent exhibition, and underwrite improvements to Old Town Hall. 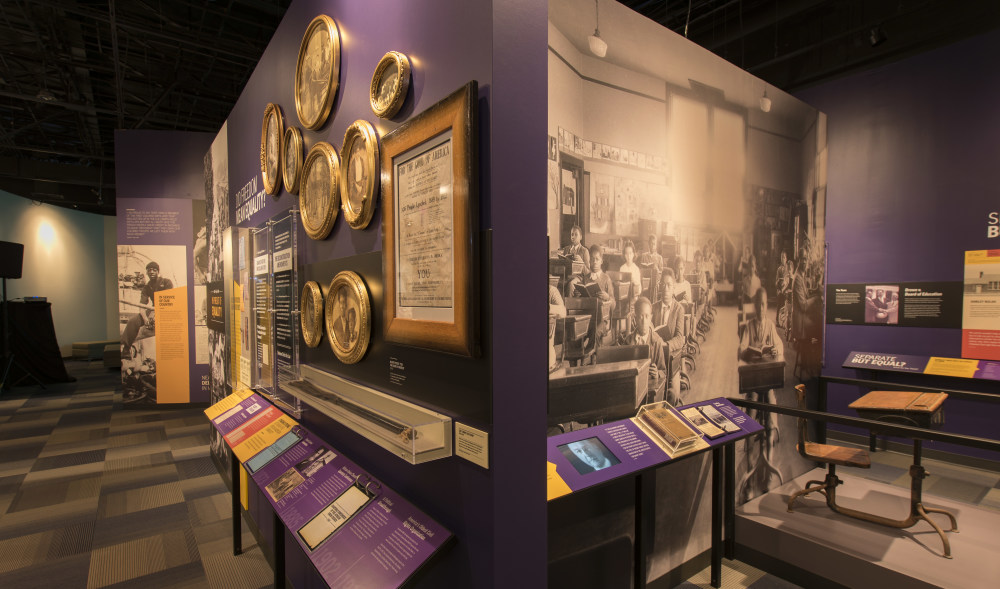 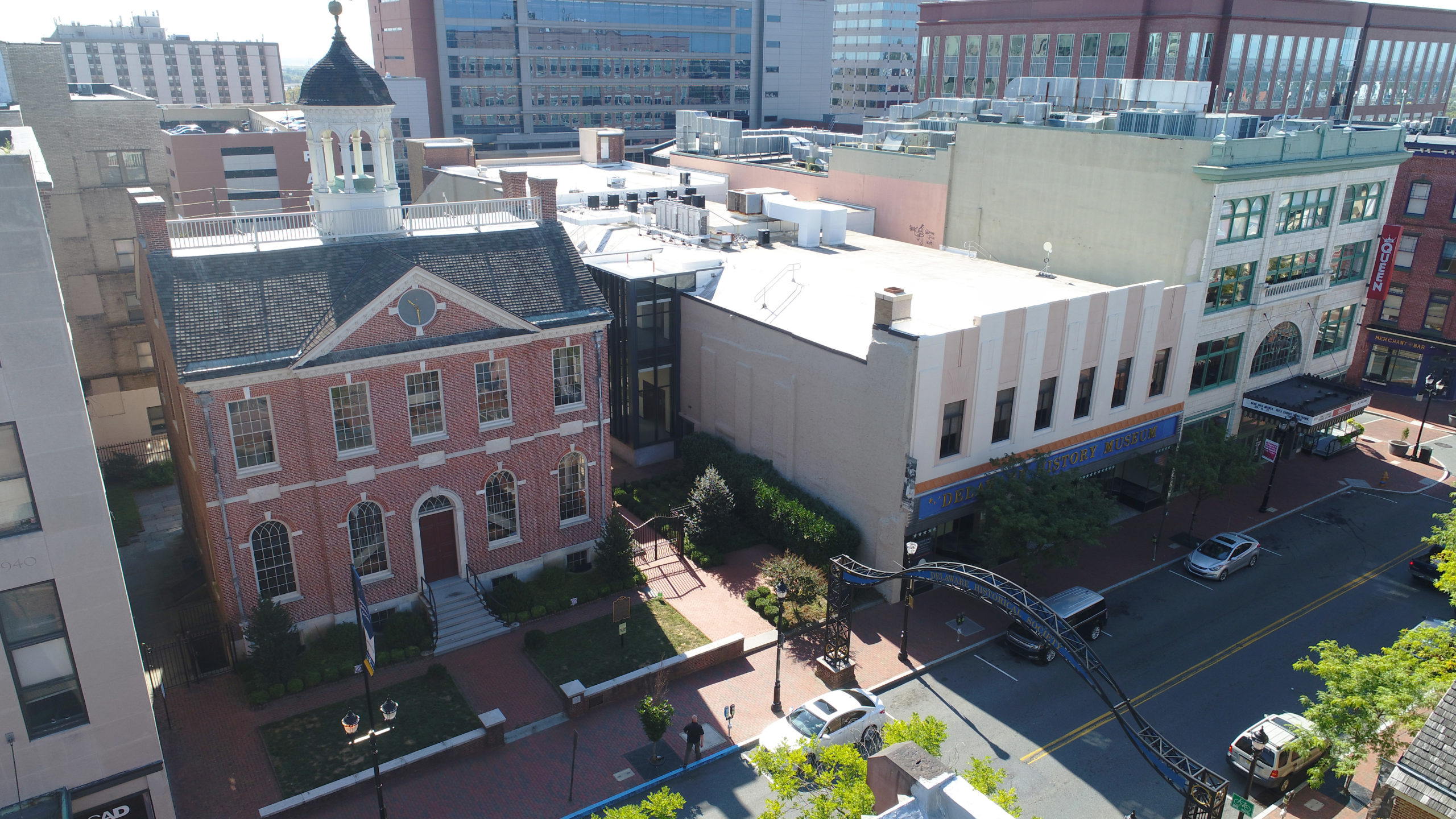 Over 150 years since its founding, DHS continues to thrive and evolve by taking on more digital projects to increase reach and access, and seeking new ways to engage, inspire, and educate. We actively pursue new collections from underrepresented groups and share diverse and non-traditional experiences in our interpretations of history. By seeking new information, considering history we think we know well from new perspectives, and working with partners to challenge assumptions about the past, we approach the past with honesty and integrity, even when history makes us feel uncomfortable, or when it’s tragic. 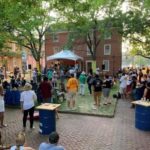 As active participants in the world around us, we are responsive to events and the needs of our communities. We empower our communities by addressing the complexities of history while appreciating the range of vantage points and perspectives. We continue to collect Delaware history and work to preserve our past with the tools, ideas, and energy of the present to improve our future.

Executive Directors and Presidents of the Delaware Historical Society

Mr. Paul Preston Davis donated his collection of Delawareana, amassed over 40 years, to the Delaware Historical Society in 2018. The wide-ranging collection includes portrait photography by Wilmington photographers, pocket watches, sheet music, advertising trade cards, and rare books—all with a connection to Delaware. In October 2019, the first installment of an exhibition featuring a portion of the large Davis Collection opened to the public. Collecting Wilmington: Place, Perspective, and Memory will remain on view through 2021.

The mission of the Mitchell Center is to collect, preserve, research, and present for public enrichment the history and heritage of Delaware’s African Americans. The Mitchell Center goes beyond the walls of the Delaware History Museum with community outreach and educational programming such as The Underground Railroad in Delaware and lecture series such as New Directions in African American History, which promote critical thinking, communication, and new research.

The National Historic Landmark Read House & Gardens is located in a scenic area on the banks of the Delaware River in Old New Castle. The distinctive architecture features early examples of high-style Federal period design, leading to the house’s 2017 designation as a National Historic Landmark—a place that holds national significance as recognized by the U.S. Secretary of the Interior. Formal gardens installed in 1848 continue to delight neighbors and visitors today. Contributions to the Read House & Gardens support innovative programming enjoyed by wide and diverse audiences, as well as the continued maintenance of 2.5 acres of historic grounds and a 14,000-square-foot mansion.